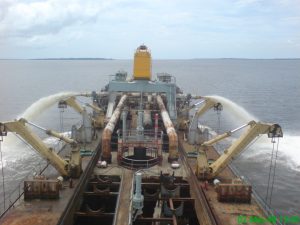 Dredging is an excavation activity usually carried out underwater, in shallow seas or freshwater areas with the purpose of gathering up bottom sediments and widening as in the Erie Canal. This technique is often used to keep waterways navigable and creates an anti sludge pathway for boats. It is also used as a way to replenish sand on some public beaches, where sand has been lost because of coastal erosion.

Dredging carried out to create a new harbor, berth or waterway, or to deepen existing facilities in order to allow larger ships access. Because capital works usually involve hard material or high-volume works, the work is usually done using a cutter suction dredge or large trailing suction hopper dredge; but for rock works, drilling and blasting along with mechanical excavation may be used.